Fifteen years ago I developed an obsession for Rolex watches which eclipsed practically every other interest or desire.  Its greatest impact was felt by my spouse: He was hostage to my unyielding resistance to any gift that wasn’t a Rolex.

Eventually Nick’s patience and resolve buckled beneath the burden of my expectation.  One Christmas he handed me an easily overlooked brown paper bag.  As I took it from him I felt a significant heft; I heard a steel bracelet shift at the bottom; I spied a bezel and Oyster case peeking out from an afterthought of concealment.  I slowly lifted the folds of vaguely familiar tissue paper which revealed the indubitable shape and renowned style of the classic stainless steel Rolex.  He said he’d been looking for one (for almost a year) when the week before a dealer called to say that a customer recently presented a used (and much older) Rolex as a trade-in and it’s “as-is” retail price is with-in Nick’s price range.  He purchased a Rolex manufactured in 1958 (the year of my birth) and it wasn’t until this year did I learn the historical significance of this watch.

A month later I found myself overheating in a Puerto Vallarta hot tub.  I dragged my lobster-red body to the swimming pool and jumped in.  Upon surfacing I heard Nick ask for time. While wiping away the stinging chlorinated water I noticed that there was moisture condensing on the inside surface of the watch crystal.

The Rolex watch is often perceived as an extravagant luxury and status symbol outshining its fundamental purpose: telling time.  But Rolex, SA (manufacturer) has played a significant role in the history of the wristwatch.  Rolex, SA can lay claim to being first at: automatically changing date on face; show two time zones at the same time (GMT Master (designed by request of Pan Am pilots); automatically changing day-and-date on face; earning “chronometer” designation (meaning that it’s mechanical movement is extremely accurate and consistent that it can be used to navigate ships.  But the fundamental and most notable characteristic (which it achieved first in 1926 and again in 1953) is being waterproof (1926); not water resistant; waterproof to a depth of 330 feet BSL (1953).

I was greatly disappointed that the Rolex Nick had worked so diligently to uncover had been compromised by irony: its fundamental purpose (time keeping) was also its assassin (time passing, i.e. years of use).   I took the infirm watch to the only certified Rolex repair center in North America (at the time) and was saddened by their conclusion: it would cost more to rebuild than the price Nick paid.  A friend gave me the phone number of a reseller in Georgia that represented Rolex watches on consignment.  Overnight I received three brand new stainless steel Rolexes from which to choose.

When I slid on the first, then the second, and finally the third I had exactly the same reaction: These Rolexes had lost their mystique, their meaning, their value; these were simply very expensive watches.  (And frankly, my time isn’t that valuable!)

The watch given to me by Nick was, in my opinion, the only true Rolex because it was the one he generously gave me.  I wanted that Rolex; and I wanted that Rolex to function like any other Rolex.  So I returned to the Rolex repair center and placed it in their expert hands.  Six months later it was returned to me in pristine condition.  It is now thoroughly serviced every three years to keep it in working order.

You may get what you ask for in life, and while it may not be exactly what you wanted, you were very fortunate to have received it.  It may be imperfect, or damaged, or used.  But it is less about what you’ve been given, and much more about how you hold it, what it means to you, and how you care for it. 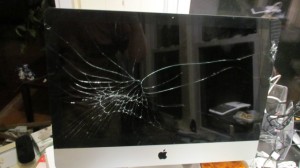 Ever since I fled from the Windows world and into the effervescent and perpetually happy Apple universe, I’d been sitting at a desk thrown together in twenty minutes and composed mostly of scrap lumber (different colors), 4×4 for legs, and a fair number of exploratory holes, saw marks, spinning-drill-bit-skid marks, a couple of awkwardly placed and slightly askew keyboard and it’s baby sister, the touch pad.  All in all if you saw it you’d immediately ask me, “Who built it, the 3 Blind Mice?”

So after eighteen months of zooming around the internet on my sleek, gorgeous, fast, and sexy iMac which looked ridiculously out of place atop a “lean-to” or “slogbod” much like hanging your Chagall in the broom closet, we gathered our notes and set off for Ikea to buy a desk as sophisticated and natty as my iMac.  And what better place to look than Ikea where umlauts and chic Danish styling meet flat cardboard boxes and a picture-book as instructions.  It’s a maddening place, three oddly shaped floors keep inattentive browsers circling like planes above O’Hare during a blizzard.  The noise level rises with each entrance of a different language or dialect.  It’s the hunch punch of furniture stores!

Our excursion to the suburbs netted a sleek stainless steel desk and return, and a stout storage cabinet for office essentials which, unfortunately, never grew past page eight and was hastily disassembled and now waits in the back of the car like a repeat offender returned to jail.  The iMac went gaga the moment I placed its serpentine stand atop the stainless steel.  At the moment of contact I experienced goose bumps then heard Neil Armstrong’s voice from afar as he set foot. . .but the iMac’s new throne is less a desk and more a table, and the return is really a shelf, and it’s stainless steel veneer shrink-wrapped around a hollow-core interior: “All meat and no potatoes,” as my dad would say when characterizing anyone or anything that scores high marks in one area but falls woefully short in others.  My iMac’s stainless steel desk and return was more representation than substantial.

Today we decided to modify our chic and Danish modern representation of a stainless steel desk by adding a pinch of legitimacy: we installed a sleek, 5/8’s inch steel, pull-out keyboard tray. . .actually we only installed a representation of a keyboard tray.  As the drill bore into the fake under belly of the table it created an incredible vibration causing everything sitting on the desk top to bounce around like kids on a trampoline.  Including my iMac.  Which jumped around like a Walleye at the bottom of the boat.

The next thing I knew I went left and the iMac went right as it ricocheted off my head and landed, screen-first on the thickened edge of the stainless steel veneer.  As I write this my head is pounding, my wallet is weeping, and my iMac screen resembles a spiders web.

I’m sure there’s a hidden message in this debacle: never mix chic and cheap? iMac’s are really iWant so iGet? Now I know: Make sure that the pedestal upon which you place the one you love is meat and potatoes!