“How you said what you said was simply enchanting,” were the first words he ever said to me.

“I was awake, I was always awake,” were the last words.

And between these two bookends were almost thirty years of an on-again/off-again relationship which redefined the term love affair, and which did very little to boost my self-confidence.  Instead this. . .entanglement. . .often followed a

dreadfully antagonistic and well-rehearsed sequence of deplorable behavior: Vanish, spot, affirm, invite, tempt, yield, pity, agony, masquerade, endure, discredit, and pluck.   And each incarnation ripped yet another piece of moral character from me until sometime in the early nineties I concluded that we were no more to each other than a dealer and an addict, and he was always, always willing to deal, not out of compassion for me, but to satisfy some dark hunger, a craving, maybe a need.

Like anonymous chunks of an ice shelf, we broke apart and drifted away from each

other.  I finding love and partnership and success in Chicago.  He and his art landed in New York.  It wasn’t his drawings they placed atop acrylic pedestals.  For dollar bills he ignored their probing fingers; for five’s he forgot their foraging.  We never discussed the activities associated with higher denominations but he emphasized they were few and far between (“even for someone that looks like me!”), a thinly veiled plea for adoration of which I ignored and which subsequently produced a stifling silence as though the bridge between us had been washed away by indifference.

He enjoyed a modicum of success with a small band of go-go-boys that played the voyeuristic circuit of Greenwich bars, and infrequently out-of-town gigs took them to South Beach, Atlanta and, of course, Chicago.  But by that time his mother had passed, his baby brother didn’t want to farm, and his father sold all three hundred acres, outbuildings, and the triple-generation farmhouse and moved into town,  So when he was in Chicago it was all business; most of it public, but private parties were 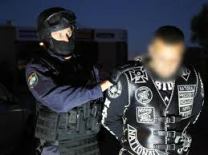 hands down the most lucrative (and dangerous).  His last trip to Chicago was a bona fide performance, secretly cast by the Chicago Vice Squad who raided the place and arrested the lot and charged them with indecency (the cheek dividing string of his g-string was 0.25″ too narrow to entirely cover his anus).  I was called and took clothes and cash and bailed him out of jail.  As the sun started to peek above Lake Michigan we were driving north on Lake Shore Drive when he said, “You know, I think it’s time to hang up the g-string.”

“Really?” I asked in disbelief, knowing (from years of personal experience) that posing whether still or sparkling was his only talent.

Staring out the window he replied, “Yup!  Problem is. . .”  Here it comes, I thought.  “Problem is, the cops kept it as evidence!”