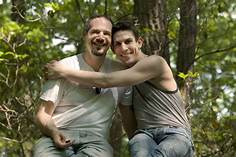 I fled to Paris and then to Charlotte because I didn’t know what else to do. I was manic and unmedicated and reeling from the expedited divorce from my husband of 32 years.

I’ve spent a fair amount of time trying to make sense of what happened, like an investigator picking through scraps of a crime scene.  But since my ex-spouse refuses to speak to me, it’s impossible for me to interrogate him, thus leaving me with a gaping hole where reason is usually found.

When I came to Charlotte, I found a gay community that was practically impossible to infiltrate. There were men that said, emphatically, that they yearned for a lover or relationship, but when presented with one, ran for the brambles! Man after man after man.

And when I did snare one, the relationship only lasted three or four weeks.

But not with Rodrigo.

Yes, we’ve become more than friends, but it’s in our friendship where we find our love.